Outdoor darts – a flight of fancy? Our man Chuck Yarrow takes a trip to the inaugural ‘Bermuda Classic’ to find out.

If you had taken a walk down Muschamp Road, SE15 on Sunday you would probably have noticed nothing out of the ordinary.

Perhaps you would have heard the noise from an occasionally rowdy garden party.

The eagle-eyed amongst you may even have spotted a photograph of a jovial looking man, dripping in gold and giving a ‘thumbs up’ sign, adorning one of the alley gates that lead between the houses.

The educated amongst you would have known that this was Bobby George.

However, there would certainly have been no indication that a major, international outdoor darts festival was right there under your very nose! 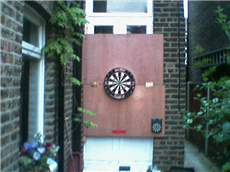 The ‘Bermuda Classic’, a spin off of the highly successful Lambeth Area Regional Darts tournaments, is believed to be the first event of its kind in the country.

The outdoor darts arena, utilising a stone oche and a three-ply wall mounted backboard, is certainly a departure from the norm, yet follows the strict guidelines laid down by the World Darts Federation ensuring competitor comfort, fair play and crowd safety.

The venue certainly needed to be up to scratch too, as the competitors present promised a tournament filled with tension and excitement, sorrow and knee-weakening ecstasy. 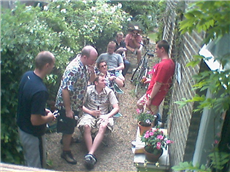 View from the ‘Board Cam’

Looking at the line up one could see a wealth of L.A.R.D. experience but mixed in there were a couple of newcomers looking to upset the applecart and take out some of the big guns.

The draw threw up no obvious shocks in the first round, all past L.A.R.D. champions only facing each other in the latter stages - a little calm before the storm maybe?

As the first round matches got underway however, it soon became clear that not one of the players would be taking any prisoners as they came storming out on to the oche to the booming sound of their theme tunes – all of which are available to own on ‘The Greatest Darts Album in The World Ever’ courtesy of Hellier Enterprises Inc. 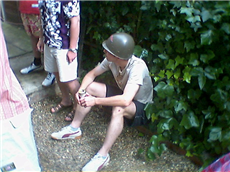 The Maverick: What a helmet!

First up was Ed ‘Feng Shui’ Hey versus Andy ‘The Maverick’ McBride.

No one likes to lose out in the first game of a tournament, but there’s never a draw in a game of darts!

Unfortunately The Maverick’s Southpaw approach could not beat the chi-whiz of Feng Shui’s arrows and Ed was through to the second round.

Next to step to the oche were Jimmy ‘Hell Razor’ Hewitt and Jonno ‘El Eight Bal’ Seward.

The Hell Razor, winner of the second L.A.R.D. tournament, was on sharp form and soon sent El Rocco scuttling back to his Colombian Hacienda.

Clearly demonstrating that he wasn’t a stranger to a barrel between his fingers, The Tungsten Tiger showed that whilst Joe may be the Daddy, he clearly wasn’t wearing the trousers!

The final first round game saw the reigning L.A.R.D. champion Martin ‘The Ice Man’ McVeigh facing the ever temperamental Declan ‘The Rage’ McGill.

Once more past form carried through and Decs, howling like a banshee, was dispatched by the Long Arm of The Law. 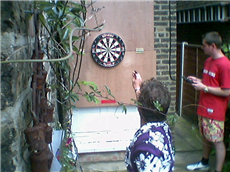 Tensions mounting, the second round was ushered in by two matches between lucky individuals who had, due to the draw structure, been given a bye through the first games.

‘One Dart’ and John ‘The Heatseeker’ Hartley were the first to play and a close match ensued.

However it was The Heatseeker’s Harrows Homing Arrows that proved that One Dart sometimes just isn’t enough.

The late arrival of one of the competitiors for the next match was explained away by a tale that should prove cautionary for all lovers of the beautiful game.

Niall ‘The Stockwell Dandy’ Conlon had seemingly been smoking performance enhancing drugs on the match morning and had an experience that he could only describe as ‘the world turning black even though my eyes were still open’.

Formerly named ‘The Horse’, Niall was soon playing My Little Pony to Matt’s thoroughbred performance as he hurdled his was through to make up the first Semi Final.

Returning to the oche next were The Tungsten Tiger and Hell Razor, rested and refreshed from their previous matches, and didn’t it show!

Unfortunately it appeared that Jimmy had done most of the resting and Conor most of the refreshing – the Tiger’s claws seemed sheathed for the afternoon and Merry Hell was indeed ‘Razed’.

To finish off a nail-biting second round, Feng Shui Hey and The Ice Man crossed arrows.

With two steely customers it was always going to be a close one, but there was only one man standing who knew his Yin from his Yang, and bad news for the Title Holder – it wasn’t him!

The tournament was de-fuzzed with a perfectly balanced performance from Feng Shui and the other Semi line up was complete. 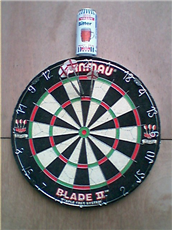 The drink of champions!

As Macca’s loss proved, strange things can happen in darts tournaments, but stranger things were yet to come…

Easy Joe Skelton, having ridden off close to the start of the second round to go and get some beers from the bottle shop, had still not returned.

As concern for him grew, desperate calls were made to his mobile phone.

Scanning the faces of the players, I could sense the fear that went unvoiced… could it be?

Had Daddy Darts fallen foul of the mysterious ‘Bermuda Triangle’?

Darts players are as superstitious as sailors, and it was clear that something was needed to ward off the evil spirits that were only just being kept at bay by the watchful eye of Bobby on the front gate.

It turned out that ‘something’ was the halftime curry!

Noxious enough to ward off any evil spirit, a spot of Double Top Biriani soon settled the players back down again.

Unfortunately we had to wave goodbye to Conor before the curry was served – we have still to learn of his fate, but feel sure that ‘The Stella Express’ back up to Manchester would have held more danger for him than the Bermuda Triangle ever could. 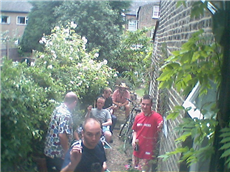 Joe on the oche before his tragic disappearance…

The Semi Finals were about to start and a Brixton Battle Royale was a fitting curtain raiser – Jimmy ‘Hell Razor’ Hewitt taking on his housemate Ed ‘Feng Shui’ Hey.

Always the closest of rivals, Ed was hoping for his first ever win against the man once known as ‘Frankendart’.

At the start of the match though, Ed didn’t seem settled - his energy levels unbalanced by the pressure of the situation - or maybe his last can of Oranjeboom?

The Hell Razor has played devil’s advocate before though, and his darts flew straight and true - Jimmy took the first finalist’s place with a flourish! ‘Smart Dart’ and ‘The Heatseeker’ were up next in the battle for that all important chance to go for glory.

Unfortunately the chilies in the Double Top Biriani seemed to be playing havoc with The Heatseeker’s guidance mechanisms – the number of hot exhaust fumes in the players arena sending his arrows spinning wildly off course.

The Smart Dart took full advantage, punishing those missed chances with his favourite double fifteen and joined James in the Grand Final.

As the pre-game photos were taken, it was apparent that both the Hell Razor and Smart Dart were right up for it – if looks could kill, we would have had a darts massacre on our hands!

The arrows started to fly and it was soon apparent that the players were using guerilla tactics – with both of them ‘going downtown’ to number nineteen!

Barracking from the audience soon sorted this out – with ‘The Rage’ leading a Greenham Common style chant – ‘What do we want? 20! When do we want it? NOW!’. 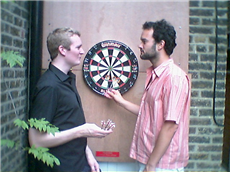 The two finalists at the ‘weigh in’

A close first leg saw Jimmy taking some honours but you can never count the Honorary Frenchy out – Big Matt leveled the scores in the next leg with that infamous double fifteen.

With the crowd at fever pitch, the next leg commenced – who would be taking home the bacon?

As is fitting of two finalists of this caliber, accuracy was at a premium and soon both players were looking at one dart finishes – with Smart Dart down to his favourite double fifteen!

A single fifteen from Mr ‘Art! A chance for Jimmy?

The arrows kept flying, the crowd silent for the first time in the match, buttocks deftly gripping the edge of their seats!

Time and time again the arrows were mere nanometers away from their targets!

Well, in the end it was Big Matt Hart, the man with the Smartest Darts, who won the day – after finding himself in the ‘Mad House’ he pulled out a magnificent double one and the match was his.

Jimmy, ever gallant even in defeat, was heard to congratulate the Smart Dart with the gracious line “Fucking lanky streak of piss!”, but Matty was oblivious – his victory giving him an almost drug like ‘high’. 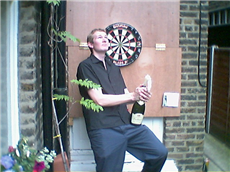 Well, with the tournament over there were only the formalities left.

Matt was awarded with a bottle of Finest Champagne (courtesy of Mr Hey) and, of course, the famous Bermuda Classic Trophy, depicting the ‘Bermudan Dart Fish.’

At about this time, beer supplies were once again running low and Matt, ever the gentleman, was kindly coerced into spending all his match winnings on some.

But the fear of the Bermuda Triangle still troubled the players… who could be sent on such a dangerous mission?

Strength in numbers seemed the way forward but most of the competitors seemed backward in coming forward.

Step up the two bravest little Hobbits in the land… ‘Frodo’ Seward and ‘Sam’ McGill, who gallantly set off to track down some booze.

After such tension, there’s always going to be a release of emotions – and what a release it was!

With the Hobbits returning triumphantly holding a slab of Stella between them, and Andy ‘The Maverick’ McBride’s post darts herbal remedies starting to take effect, the after show party really kicked off and of course there were a few casualties.

Feng Shui was the first to falter, butting a candle holder with enough force to wax his hair for a week.

With a name like ‘The Stockwell Dandy’, you don’t expect anything less than finding Niall lurking around in bushes and sure enough after a little tumble there he was, stumbling around in the begonias.

As the Hell Razor began to busy himself urinating in the venue’s only source of fresh rainwater for the garden and The Rage, as all Hobbits do when they’ve had a little too much Elderflower Wine, attempted to pull one of the Orcs from next door, it seemed like a good idea to move everything inside and start to wind the party down. 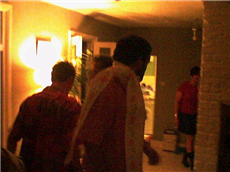 After a delightful display of traditional Bermudan dancing from Jimmy (I believe the move is called ‘The Windmill’) and some ridiculing of the newly crowned champion who was power-snoozing on the sofa, the guests started to head home. Before I departed from a wonderful day’s darts action, I just had time to tuck the little hobbits up in bed together in the spare room. And do you know, I’m sure I heard them polishing The Ring as I left Muschamp Road.


Frankendart Gets The Most Rendered and Wins The Jocky Award

Er,toilet roll is not a scarf! 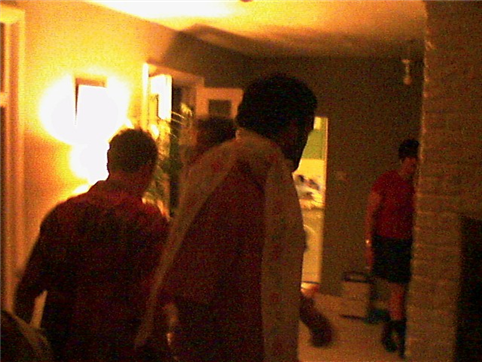