Classic Sid Waddell Quotes from Down The Ages

Sid Waddell is a true darts legend. Well known for his famous quotes and turn of phase Sid has coined many of the darts sayings we all use when standing on the oche. A Cambridge Graduate and king commentator Sid has been working on the BDO, PDC circuit for over 25 years and you can still hear him on premier league darts. Below are some of Sid Waddell's famous darts sayings. Enjoy and may the darts be with you.

That was like throwing three pickled onions into a thimble!

He's playing out of his pie crust.

Darts players are probably a lot fitter than most footballers in overall
body strength.

There's no one quicker than these two tungsten tossers...

He's about as predictable as a Wasp on speed

Look at the man go, its like trying to stop a waterbuffalo with a
pea-shooter

The atmosphere is so tense, if Elvis walked in, with a portion of chips...
you could hear the vinegar sizzle on them

His face is sagging with tension. 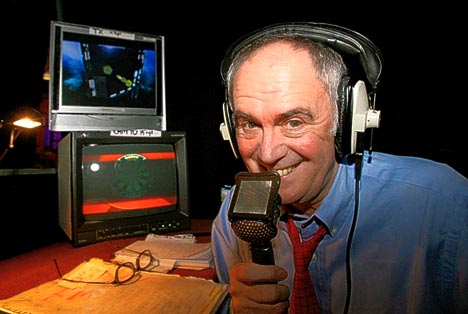 The fans now, with their eyes pierced on the dart board.

He's been burning the midnight oil at both ends.

That's like giving Dracula the keys to the blood bank

As they say at the DHSS, we're getting the full benefit here.

He is as slick as minestrone soup

There hasn't been this much excitement since the Romans fed the Christians
to the Lions.

I don't know what he's had for breakfast but Taylor knocked the
Snap,Crackle and Pop outta Bristow

Even Hypotenuse would have trouble working out these angles

Steve Beaton - The adonis of darts, what poise, what elegance - a true
roman gladiator with plenty of hair wax.

If you're round your auntie's tonight, tell her to stop making the
cookie's and come thru to the living room and watch these two amazing
athletes beat the proverbial house out of each other

The players are under so much duress, it's like duressic park out there!

This lad has more checkouts than Tescos.

Big Cliff Lazarenko's idea of exercise is sitting in a room with the
windows open taking the lid off something cool and fizzy.

It's like trying to pin down a kangaroo on a trampoline

Well as giraffes say, you don't get no leaves unless you stick your neck
out

His eyes are bulging like the belly of a hungry chaffinch

That's the greatest comeback since Lazarus.

It's the nearest thing to public execution this side of Saudi Arabia.

His physiognomy is that of a weeping Madonna.

He's as cool as a prized marrow!

Under that heart of stone beat muscles of pure flint.

He looks about as happy as a penguin in a microwave.

The pendulum swinging back and forth like a metronome

By the time of the final on Sunday he should be fit to burst!

There's only one word for that - magic darts!

When Alexander of Macedonia was 33, he cried salt tears because there were
no more worlds to conquer..... Bristow's only 27.

Eat your heart out Harold Pinter, we've got drama with a capital D in
Essex.

If we'd had Phil Taylor at Hastings against the Normans, they'd have gone
home.

Look at him as he takes his stance, like he has been sculptured, whereas
Bobby George, with his bad back, looks like the Hunchback of Notre Dame.

He's playing like Robin Hood in the Nottingham super league

Phil Taylor's got the consistency of a planet ... and he's in a darts
orbit!

The atmosphere is a cross between the Munich Beer Festival and the
Coliseum when the Christians were on the menu.

Jockey Wilson, he comes from the valleys and he's chuffing like a
choo-choo train!

These guys look calm but inside they are as nervous as a vampire who knows
there's a sale at the wooden stake shop in the morning.

That was like watching Popeye when he found his spinach!

He's as twitchy as a frog in a blender

He's going like the Loch Ness Monster with a following wind!

Keith Deller is like Long John Silver - he's badly in need of another
leg.

He looks as happy as a scorpion who's just had a pedicure!

Cliff Lazarenko's jumping up and down like a gorilla saying give me back my banana!"

On Bobby George - "He's like a Sherman tank on roller skates coming down a mountain!"

He's twitching more than a one legged ferret!

He's moving with the purpose of a Panzer Division

He may practice 12 hours a day, but he's not shy of the burger van!

He's like Jack The Ripper on a Friday night.

He's got one foot in the frying pan and one on thin ice.

Rod now looking like Kevin Costner when told the final cost of
Waterworld.

Tarantino re-writing Gunfight at the OK Corral couldn't have done any
better than this.

It's like Dracula getting out of his grave and asking for a few chips with
his steak.

That Lad could through 180 standing one legged in a hammock.

This game of darts is twisting like a rattlesnake with a hernia!

It's just like taking a sausage from a boy in a wheelchair.

This is the clash that makes King Kong versus Godzilla look like a
chimpanzees tea party!