PLC - 05 Dec 2015
Dress: Double Demin v Pharaohs
I’ve managed to sort out the results from some photographic evidence. Well done for making the final Decs – not sure where you actually were for it.

Details
DAM 2015 could only be described one way - An SAS selection processed played out with darts and 11 men in physical peak primed for the occasion. In the following 7 hours they would struggle with what most would outline as the most physically demanding day in darts. Oche time is always guaranteed at DAM but would people be able to fulfil that offer?

With only two attendees arriving before the agreed fine time and some players feeling over 90 minutes late was an acceptable time to turn up, there would only be two winners on that Saturday night – Captain Morgan with his throat ripping Rum and Phil the barman and his back pocket.

Before proceedings had kicked off, thirty minutes of throat warming was necessary for some and from that moment the slide into Darts Nadir started.

Ding Ding - Round One
The far board (Wrangler) started strongly with an immediate acceleration in scoring. The Matador and The Chaos proved that throat stamina and arriving on time can prove to be the difference and progressed to round two.

The near board (Levis) struggled from the off. New man It’s Been Twenty Years (IBTY) struggled for range early on and scores struggling to get above the ubiquitous Bollock and Piss. Eventually the experience of The Hero and The Rage forced themselves to the front and scraped through to round two. However, along the way The Rage picked up his customary ASBOs – was the damage too much?

Lee brought up the rear so much so that losers in the first two groups joined in to bolster numbers. Ace had burst into the room like a drunken Liberace but there was some surprising finesse to his arm and most were astonished to see him make round two. Had his finage taken affect yet? Had he annoyed too many people? IBTY, bolstering the numbers, was finding his range and promptly took his legs with aplomb. With limited rum intake so far could he be a contender?

Play off
They say that rule number one of mass man darts legs is a maximum of 4 to a board. DAM tore that rulebook a new one and promptly created a 5 man army of darts focused on one goal only: a battle to the semi-finals. Everyone deserves a second chance but some were touching on three and there comes a time when it’s time to sort the men from the boys. Nothing Special and Splash proving they had the equipment and took the final two places in the Semis.

Interval
There was about a 30-60 minute break while everyone collected their thoughts, took refreshment, visited the garden and tried to work out who had made the semis.

Semi one - Tut
With a first selection made it was getting to squeaky bum time. No second chances, it was now or never. The Matador showed the others who was boss and easily danced his way to a place in the final taking no time at all to show why he was defending champ. The Hero and The Chaos traded blows whilst Nothing Special looked on. It was 50-50 until The Hero clasped the final spot.

Semi Two – Cleopatra Comin at ya
The near board again showed its distaste of its players by giving them some measly scores. However the whirling dervishes that were Ace and The Rage managed to steady themselves and hit the requisite doubles to complete the final 4.

Interval 2
During this period two of the finalists, The Rage and Ace, formed some form of secret club and spurred on by The Captain found non board related items to throw darts at. Huge finage followed and they ruled themselves out of the final. One was found asleep and the other went AWOL.

The Final
The stats show 4 men in this final but the reality was there were only two men standing toe to toe on the oche. The Matador; the form player, defending champ and showing his strength fighting off The Captain; versus The Hero, Lard no.1 and DAM host. Score to Score they went, arrow to arrow until the Hero nailed the double 8 required to send the crowds into fits of relief and regret.

Once again a top night and top darts but as is always the case, only one man really wins – The Captain.

One of the tougher calls 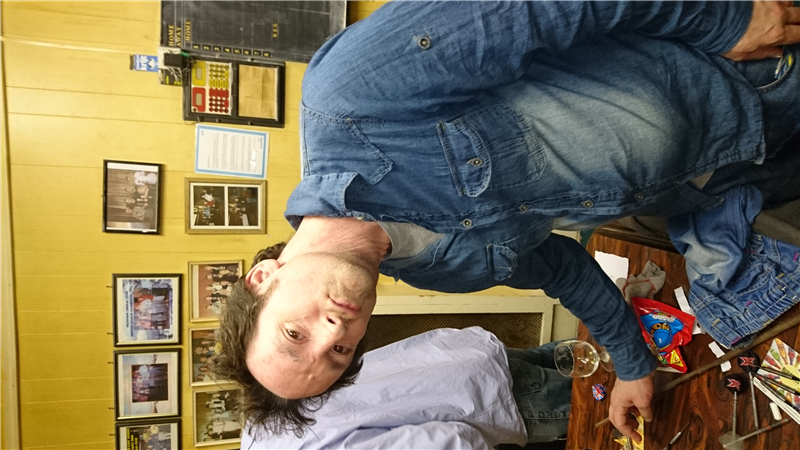 Group Round 1 - Wrangler
The Chaos
The Matador
Splash
Bungle

Group Semi - Tut
The Chaos
The Hero
The Matador
Nothing Special