If you try bellowing “Scupper me sideways you Salty Seadog!” in most public places, you’re likely to be asked to move on and stop frightening the children.

Our man Chuck Yarrow found out, however, that such parlance could be used under certain circumstances - when he jumped aboard the “Bermuda Classic” for an ocean going darts competition.

If ever there’s a sight that’s guaranteed to strike fear into the hearts of men, it’s a host of young fellows dressed in slightly too-tight pirate’s garb, hanging round the docks.

However, this was the vista that greeted me at East Dulwich’s world famous Muschamp Road Boatyard, when I joined a piratical party of darting enthusiasts for the second annual Bermuda Classic Darts Tournament. 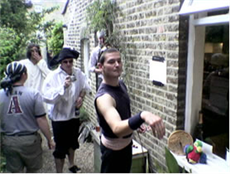 Now - even landlubbers know that the Bermuda Triangle demands levels of bravery uncommon amongst men to sail her seas.

Imagine how brave you have to be, then, to not only sail those seas; but also take part in a world-class invitational darts competition at the same time! Surveying the gathered contestants, it was clear that each displayed an unnatural fearlessness, which struck me as strange. 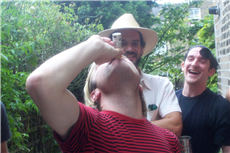 The ancient, subtle and time honoured tradition of ‘Finage’

I was just thinking it might be due to the large quantities of a strange drink called ‘diesel’ I’d seen consumed when all of a sudden, without the slightest hint of a Chorus of Angels - or even ‘Let Me Entertain You’ - Jesus of Nazareth, the Son of God, appeared from below deck! With such holy sponsorship, it was suddenly clear how these men were keeping their peckers up in the face of such adversity.

As soon as I was onboard, I clambered up the rigging to gain a better view of proceedings and surveyed the oche, situated amidships.

It seemed as though the seafaring darts regulations were exactly the same as those on land, with the throwing distance coming in at just under 1/23rd of a league.

The tournament setting was deceptively simple: a driftwood backboard prevented damage to the main cabin, a large harbour stone served as an oche and a hatch into the galley allowed the seamen access to the cold storage.

As I watched from the crow’s nest, the anchor was hoisted; the ship’s rum cracked open and the Bermuda Classic set sail.

Only several hours of perilous maritime darts would show which of the shipmates would be crowned King of the Seven Seas and receive the fabled Bermudan Dart-Fish Trophy. 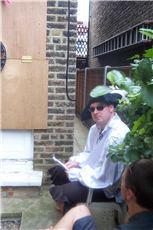 Once safely out of the harbour, the draw that would mark the route to the final took place.

Tension rose to a point where you could cut the air with a cutlass, as one by one the names were drawn out of a tri-corner hat by the Championship Quartermaster, Claude ‘Francis’ Rossi.

One bit of bad luck here and a fellow could be forced to walk the plank of shame a whole lot earlier than he’d wish! Finally the draw was finished and thankfully it revealed no nasty surprises for any of the crew. 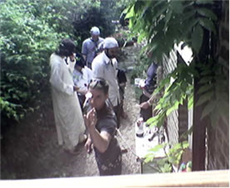 The view from the crow’s nest

The preliminary rounds came first, with those shipmates unlucky enough to have to face an extra game throwing to stay in the running.

First up was Matt ‘Harr Harr Me’ Hart (ies) versus Conor ‘The Tungsten Cutlass’ Gray – a match between the ship’s two heavyweights that would set the tone for the rest of the day! With neither competitor giving quarter, the arrows rained home.

Next to toe the oche were Declan ‘The Pinstripe Pirate’ McGill against John ‘Ginger Beard’ Hartley.

Another close match ensued, with Ginger Beard just edging out the dandy-panted pirate, again by two-nil.

The final preliminary match was the one that the shipmates had been looking forward to though – Kingsley ‘The Pirate King’ Ash facing up to Jesus ‘H’ Christ, brandishing his flaming arrows of justice as though he’d just bought them from J D Sports! As the competitors warmed up, the troubling Trade Winds that had hampered the previous games eerily seemed to die down, setting the shipmates whispering amongst themselves.

Was this an effect of the Bermuda Triangle, or was Jesus receiving a little help from up on high? Just like a mermaid, it seemed a little fishy.

The crew watched with baited breath, but everyone’s questions seemed to be answered when The Son of Man roared through the prelim two-nil!

As the first round got under way, it was clear that nerves were starting to fray.

Matt ‘Harr Harr Me’ Hart (ies), always a feared competitor, faced up to ‘Hero of the High Seas’, the captain of the good ship Dam.

With Matt taking the early leg, it looked as though his fearsome reputation might see him through but then The Hero levelled the match, taking the second.

With all to play for both shipmates threw like Poseidon casting his trident in the final leg, Tarqs just managing to scupper Matt for a vital knockout. 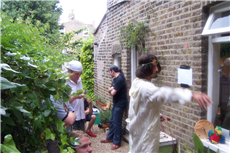 A typical scene down at the docks: Pirates, Diesel and Jesus

With such contrasting facial hairstylings it was always likely to be a hard fought match, and that’s certainly the way it turned out.

Pimp Beard took the first leg with ease, but then Ginger Beard’s Celtic facial hair ancestry kicked in and he fought back like a man possessed, to just win the second leg.

The third leg went down to the wire, with both players struggling to find their doubles, but eventually James proved that “there’s no business like ho’ business” as he and his vice-themed chin went through to the semis. 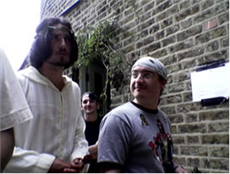 “I haven’t been this nervous since my last invite to supper!”

The latter half of the first round saw some big upsets.

With darting CVs like that, you expect a close fought match and that’s certainly what we got, with Bully Black Beard just managing to steal the first two legs to take the game.

Next up was a return to the oche for Nazareth’s most famous carpenter, this time hoping to carve out a win against Jonno ‘Dirty Rodger Flint’ Seward.

After two legs the honours were split evenly, but then unfortunately Jesus seemed to show signs that he’d succumbed to a little too much Burning Bush.

There was nothing our father in heaven could do except give up the Holy Ghost as El Jonno played Devil’s Advocate to take the last semi-final place.

The penultimate round of any great darts contest is where the wheat is sorted from the chaff; the Shipmates from the Shark Bait.

In the first semi, ‘The Hero of the High Seas’ took on James ‘Pimp Beard’ Hewitt.

There had been talk before the match that The Hero had been doing some ‘solo sailing’ as practise for the big day, and that certainly seemed to show in the semi.

James’ whiskers may impress his ladies but there was nothing the Pimp Beard could do against the razor-sharp finishing of The Hero.

The Hero took the match two-nil to gain the first finalist’s place and sent a ripple of anticipation through the crowd. 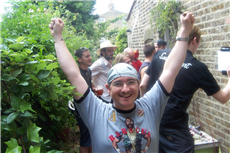 To see who would join him in the final, the eager crew had to sit through yet another nail-biter.

Again the honours were split at the end of the second leg, one a piece.

There was only one man hard enough to take the pressure though – Flint by name, Flint by nature! Jonno ‘bullied’ Black Beard into submission to set up a tremendous final!

When you’re playing for the coveted Bermuda Classic trophy, depicting the graceful yet deadly Bermudan Dart-Fish, there’s only one way to win, and that’s by taking no prisoners.

It was clear that both finalists were darts experts, but much more was needed to walk away with the prize.

As I watched the spectacle of the final unfold, I realised that only one of the combatants had the right outlook; only one displayed the mettle that was sure to net the prize.

“Cometh the hour, cometh the man”, so the saying goes.

Thankfully this didn’t happen, but one man emerged victorious never the less… Wham bam, thank you ma’am – the Captain of the Dam!

With a devastating flurry of darts that certainly ‘shivered the timbers’ of the backboard, The Hero of the High Seas proved himself worthy of the title with a three legs to nil win.

Dirty Rodger was left to wonder if selling his soul to ensure his unholy victory over Jesus had been a tactical gamble that hadn’t quite paid off!

With The Almighty also showing his displeasure by sending a sudden squall of rain to hammer the deck, the winner’s ceremony had to be rushed, but the victor looked thoroughly jubilant never the less.

The fact he had also received a ship’s ransom of gold florins to spend back on shore must certainly have helped too! 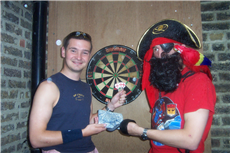 As the weather conditions had taken a turn for the worst, the crew dived into the galley for a spot of Double Top Biriani and some post match analysis.

Frothing flagons of ale and some robust sea shanties were soon doing the rounds and spirits onboard lifted - even for those vanquished during the competition.

There was a touching moment when Matt, former Bermuda Classic champion, handed the trophy to the new winner, but pirates often get lonely at sea, so touching isn’t always as frowned upon as it is on dry land.

With increased gusting from the poop deck filling the sails, the voyage home took no time at all, and then it was all down the dockside taverns to find some wenches. 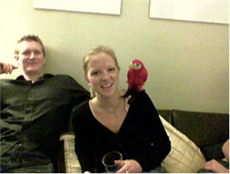 Birds: Only highly intelligent varieties can be trained to talk

The Gowlett Arms was soon a blur of beer and bandanas as the magnanimous Hero of the High Seas ensured that none of the shipmates’ throats remained dry.

The crew sat and talked long into the night, swapping tales of battles won, fish caught and the going prices of Pimp-Beards’ harem.

As the night wore on however, it gradually became clear that something strange was afoot in the tavern.

Where was the Pinstripe Pirate? Searching the room, his fate soon became horribly clear.

Innocently wandering to the far side of the bar, he had become entranced by a Siren’s song.

These hideous, harpy-like creatures use their tuneless melodies to make the listener see them as beautiful maidens, and are the scourge of drunken pirates everywhere.

As the crew looked on, their worst fears were confirmed; he was now playing a game of pool against her, a sure sign he was completely in her spell.

The crew hung their heads in sadness for a brief moment, but such is the way of life in the Bermuda Triangle – you win some, you lose some.

But life goes on.